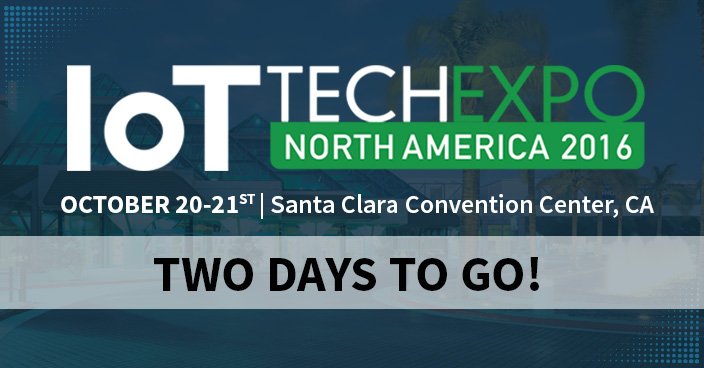 After weeks of tweets, emails, phone calls, lanyard making and other organising, IoT Tech Expo North America is almost upon us. Rarely have we seen such an exciting line-up of speakers with as diverse a schedule of sessions, meet-ups and panels. With enough delegates to fill a college basketball arena the event promises to deliver on its considerable expectations. So how do you navigate such a vast event? Here are five ways to get the most from this week’s expo:

Keynotes: While some attend these events for face time with other IoT innovators, in Santa Clara, the keynote speeches are an unmissable way to kick off your day at the expo. Day one sees more established topics (How the IIoT is transforming industry) to more nascent elements of the Internet of Things (Insurance & IoT, for example) covered, with the other key areas (connected living, evolution of wearables, the importance of data) explored on the morning of day two. But regardless of your area of IoT speciality, the event keynotes will energise you for the day ahead. They provide incisive talking points for that much-needed first coffee break as well as giving you food for thought for your own IoT endeavours.

Exhibitors: Don’t miss out on the exhibition. So many of the most insightful talks in the conference come from vendors, and the exhibition hall is the chance to get up close with some of the people at the coal face of IoT innovation. It’s a thrill to see IoT concepts made flesh and this is where it all goes on. The most valuable interaction often comes out of an an idle chat at one of the stands or passing the coffee area and joining in with an animated conversation about BLE or drones, for example. This is the type of event where the sales pitches you see will be genuine industry game changers, in the truest sense of the word.

Networking: As well as passing conversation in the exhibition hall, there are official places to catch up, do business and hatch plans for IoT world domination if you so wish. Breakout areas in exhibition halls always fizz with energy, and then there’s the official IoT Meetup too which takes place at 4pm in the convention centre on day one and covers Silicon Valley, transport, enterprise, wearables and more. Beyond that there are myriad opportunities across the two days to introduce yourself to someone who could change your life and theirs. Coffee breaks, post-keynote chats, discussion panels and the bar. And we can’t forget:

Digital discussion: Twitter chats, message boards, virtual roundtables, the online component of the event is an 8th track in itself. Following the discussion online around a conference session, for example, gives you access to other subject matter experts for that extra bit of context on the topic, plus you get immediate feedback and sentiment analysis once the talk has finished. Slide decks are often accessible straight away and give you a conversation starter ready to go to carry on that networking journey. And did we mention the IoT Tech Expo app and networking tool? Organise your schedule, plan meetings, share knowledge – it’s so much easier now.

Hackathons: Online or face to face conversation not enough? Programmers, makers, dreamers, doers – let’s get doing! A term coined some 15 years ago, the hackathon has proliferated recently. They are often complicated but they don’t need to be. The IoT Hackathon is where you bring more than yourself and your avatar to the table; you bring your skills and your hardware too. Innovation created there and then, business problems solved on the fly, crowdsourced solutions to IoT stumbling blocks found. The IoT Tech Expo Hackathon takes place across both days of the event and it culminates in a short awards ceremony at the end of day two. You can apply here.

This is just a handful of ways to get engaged at IoT Tech Expo North America but there are plenty more as well as probably a few we haven’t discovered yet. It’s your expo, programmed to address all the salient issues in this key growth area of modern technology. No doubt in a week’s time we’ll have answers to those questions we’ve been asking for months, and we’ll most likely have sown the seeds for the next growth stage of IoT innovation too.