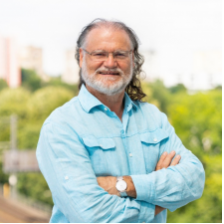 Michael Bommer CEO of weeve, has decades of executive experience in the software and IoT sector. He has been a Start-up consultant for start-ups in Germany, Europe and US. He is also an active founder and angel investor since 2005. In 2012 he founded Relayr, a successful German IoT startup which has since become international, and was acquired by Munich RE. Since  then, Michael has been part of several IoT focussed start-ups and is one of the initial founders and investors in Next Big Thing – a venture studio for the machine economy.