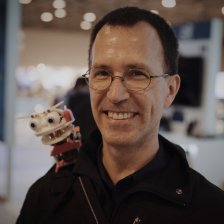 Intel Principal Engineer Dr. Michael McCool has experience in a wide range of areas, from computer graphics to high performance computing to robotics to IoT.  He has been both a university professor and a successful entrepreneur; his venture RapidMind was acquired by Intel in 2009.  Currently he is working on robotics and the Internet of Things (IoT), including programming environments, systems for real-time and embedded HPC software, accelerated computing for HPC and AI, ROS, edge computing, and IoT metadata and semantics.  Most recently, he has been co-chairing the W3C WoT Working Group developing the W3C Web of Things standard which supports portable metadata for IoT devices, describing their services and their network interfaces, in order to achieve scalable IoT interoperability.  Within the WoT WG, he is also chair of the Discovery and Security task forces, considering issues of privacy-preserving IoT discovery (metadata distribution) mechanisms and secure access to IoT devices and services.