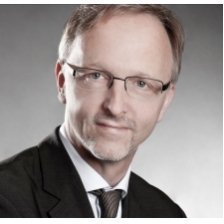 Dr. Thorsten Henkel, born in 1966, studied architecture & urban planning after two years military service. In 1995, he achieved a diploma from the Technical University of Dortmund and obtained a degree as a civil engineer.

After two years working as an employed Architect, he became a research fellow at the chair of Computer Science and Civil Engineering at the Technical University of Dortmund. In 1999, he went to Dessau and became the head of the CAAD Labor of the University of Applied Science Dessau. In 2002, he achieved a doctorates degree from Bauhaus-University Weimar in the field of Computer Science and Architecture. Since 2002, he works as an employee at Fraunhofer-Institute for Secure Information Technology SIT. In 2005 he was promoted to a Department Leader.

You can find Thorsten Henkel speaking on...

Panel: Creating a competitive edge with the IIoT